Last September, Mrs. Stop Boris and I were among the 35,000 that registered for, and indeed the 60,000 that turned up to, the inaugural London Freewheel cycling event.

The day was a real success – from a fun perspective, of course, but even from a Tory-pleasing economic point of view: just taking our own expenditure into account, we ultimately contributed a total of eight hundred pounds to London’s cycling shops when in subsequent months we each purchased rather nice folding bikes as a direct result of having enjoyed the day so much. Freewheel had inspired us to do more cycling: mission accomplished.

The only depressing part of the day for us was the number of people cycling around with ‘Back Boris’ flags on their bikes, featuring the silhouette of Boris and his bike, reinforcing the public image of Boris as a bike-lover and lodging in the attending cyclists’ minds that, despite this being an event initiated by Mayor Ken, Mayor Boris was the real cyclist and he was the one who all those in attendance should be voting for in May.

A year on and already Boris is not turning out to be as good a thing for cycling in London as many might have been led to expect. One of the most serious anti-cycling moves he’s made so far was the cancellation of the Parliament Square part-pedestrianisation. As Tom pointed out last month, part of the rationale for this scheme was to prevent cyclists being “squeezed between a single lane of traffic and steel barriers” – gyratory systems like this are one of the most dangerous features of London’s roads for cyclists, but it seems Boris has no intention of improving life for those on two wheels if it risks causing the slightest inconvenience to those on four (especially if all four receive torque from the engine simultaneously).

But now late September is rolling around and the second Freewheel event provides the perfect opportunity for Boris to set the record straight, and remind those who enjoyed his colourful flags last year that he is, despite apparent evidence to the contrary, still on their side really.

Except, oh dear, what’s this? Thursday’s Guardian Diary column has some interesting information:

So you have the mayor of London – unarguably a cycling enthusiast – and the Freewheel jamboree, the second largest cycling event in Europe. Put them together and what do you get? Another opportunity for downsizing, it appears. After the success of the event last year, when 35,000 were expected and 60,000 turned up, there was the promise from his predecessor Ken Livingstone (the broadcaster now known as DJ Ken) that the cycle-fest would attract 100,000. To that end, the capital’s transport authority, TfL, budgeted £1m. But smaller is beautiful these days, and so we learn that this year’s capacity for the family cycling event, scheduled for September 23, will be 45,000 – which is 7,000 more than registered in 2007 but massively scaled back on the ambitious arrangements DJ Ken had set in place. Add to that the fact that this year’s sponsor, Sky Sports, is only stumping up £100,000, compared with the £300,000 handed over last year by Hovis, and it is easy to see why many are disgruntled. Wear your helmet, Boris.

I didn’t intend my Stop Boris campaign posters to become a told-you-so checklist, but, er…

A Boris At The Olympics cartoon seems more appropriate still: 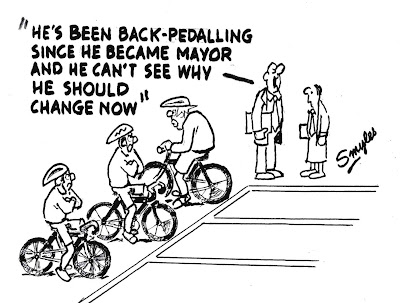