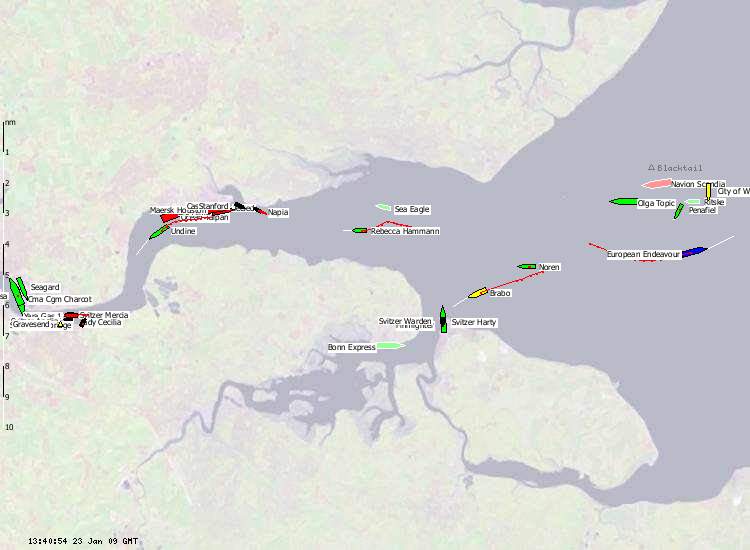 Boris is out on the Thames Estuary in a Belgian dredger called the Brabo.  There’s a website that shows the positions of all ships in major UK estuaries in real time.  Are you thinking what I’m thinking?  Let’s watch Boris trundle about, and get a steer on where Oakervee and Malthouse are looking at building their birdstrike magnet.  Why not save the handy JPEG version every so often?  I am, in order to plot on my airports map later.  Fun, fun.

Update – Dave Hill has a message from the Mayor:

From aboard the Brabo, Boris has just told me via mobile that “the weather is terrible” but that he’s hugely encouraged by what he’s seen today. He’s convinced that fears about large numbers of birds being at risk from aircraft are misplaced – “it really isn’t an issue” – and that the “visual impact” on humans of the airport itself would be “virtually non existent”, as from where he was he couldn’t see either coast.

I fear we’re seeing another example of Boris Exaggeration Syndrome – the innate ability of the Mayor to assume that because he’s obviously right about everything, a little bit of exaggeration doesn’t hurt.  Of course, he’s not right (he’s the Dunning-Kruger Mayor after all), and in this case it’s obvious what he’s doing – he’s sitting out in quite poor weather about 7 or 8 miles off the coast, and from that claims that you won’t see his stealth airport.  Of course you will, you can see France from Dover, let alone the ships sailing between them, which are a good deal smaller than an airport high enough to resist North Sea storm surges energised by climate change.

There are other things I could mention here, like him going a good five miles past where I thought the airport would be, and presumably into rather deeper water (anyone got the charts?).  I suspect they might actually have been looking at the proposed barrier/road/airport scheme proposals which I currently can’t find anywhere.  I’ll keep looking.