TfL : Boris To Give Up More Power? The ‘Get Boris’ Faction

Turning to the Evening Standard’s webpage, there’s an interesting picture of a sad balding has-been whose world collapsed last May and whose frequent subsequent ramblings about have been increasingly shrill and out of touch.  Yes, it’s Andrew Gilligan’s byline photograph, on a classic hatchet article about the Starlight Music Academy and Lee Jasper.  Boris has incurred the wrath of the Great Journalist by failing to have SMA thrown out into the street.  Indeed, the ever-generous Mayor has allowed them to stay on, for a bit.

Leaving aside the text of the article, the tone of which I’m fairly sure I could get a moderately bright 5 year old or even a computer to impersonate, I’m struck by the photograph of Jasper and the Offley Works building at the top.  ‘Looks photoshopped’, was my first thought.  ‘I wonder if we can find the original’ was my second thought.  So I went hunting.

Here’s the very first image in a Google Image Search for ‘Lee Jasper': 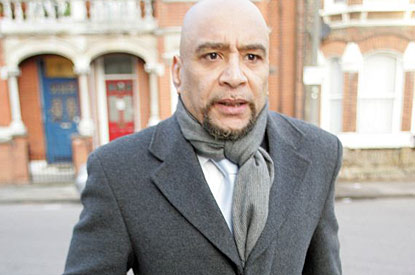 It’s from this Standard piece last year, and is presumably a library photo, since I’m not sure Mr. Jasper jumps for the Standard when they ask for a photoshoot.  Here’s today’s illustration by way of comparison.  It’s captioned ‘Leases: Lee Jasper and the Offley Works in Kennington': 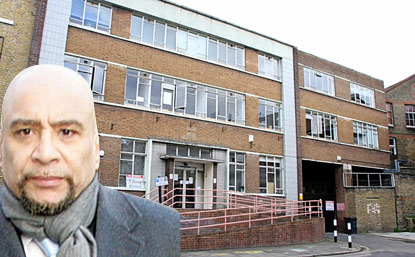 Now, either Mr. Jasper suffers from OCD and thus routinely wears exactly the same grey scarf knotted exactly the same way over exactly the same suit and very pale blue tie with the same pattern of light and dark hairs in his beard, or those photos were taken on the same day, which is at least six months ago.  Now, to be fair, perhaps the first photo was taken at Offley Works facing the other way – fortunately with Google Streetmap we can find out.  Offley Works, if you want to sing along at home, is at 44-46 Offley Road, Oval, SW9 0LS, a stone’s throw from the residences of both my partner’s uncle and a senior cabinet minister I’d better not identify but whose name rhymes with ‘shameless, lying whore’.  The building is at the bend in the road.  Now spin Streetmap round and look at the other side.

Ahem.  So, is the first picture taken in Offley Road?  No, the houses there are handsome three-storey classic London yellow/grey brick affairs with substantial steps up over basement areas.  Probably about 1860 or so.  The first photo seems to be in front of late Victorian quasi-gothic red brick buildings with lots of ornamentation, probably about 20 years newer.

I therefore call shenanigans – I reckon both images were taken on the same day, although they aren’t the same image.  Someone’s then photoshopped the six-month plus vintage image of Jasper onto a stock shot of Offley Works, then captioned it to make it look like he’s directly connected when, presumably, he isn’t so much these days and it’s Boris Johnson’s LDA that have made the decision.  Shoddy stuff, I reckon, verging on outright deception but what did you expect?

“The printed version of this story (pdf attached) shows the genesis of the pic on the Standard website.”

Indeed it does, as the print version shows two photographs, from which it’s quite clear that the website image is photoshopped from a photo of Jasper outside the red brick residences and a stock photo of Offley Works, as suspected.  The caption is also different: