A few more things from the Routermater trainwreck to add to the pile:

I was looking at one of our new Enviro400s the other day and it’s a remarkably attractive, modern, curvy design, evidently built very much with London in mind, since it’s currently the best seller to London operators.  Nice, wide door too.  Isn’t that a ‘New Bus For London’ right there, then?

However, on my first trip on the new bus, the smart interior was slightly spoiled by this: 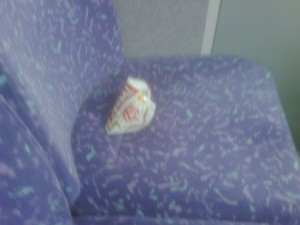 which would appear to be an empty can of Tyskie Polish Lager.  Bus booze ban still going well then.

Oh, and the pointless 507 debendification is apparently scheduled for the 25th July, but whether it’ll be in dribs and drabs (there’s a lot of slowness in bus deliveries, and I haven’t seen any indication of new Mercedes 12m Citaros being delivered yet) or one magic swoop is as yet unclear.  521 is now down as the 29th August.

Finally, KPMG are apparently [PDF] the people running the ‘independent’ bus service review, after their success in spotting a £100m gap in the LDA accounts somehow missed by Boris’s Forensic Audit Panel while they were trying to dig up dirt on Lee Jasper.  This is reporting into car naked streets loving TfL supremo Daniel Moylan and coupled with the Routemaster update above means Boris’s promise of ‘conductors not consultants’ can safely be consigned to the memory hole, too.  KPMG are doing very nicely out of Boris, actually – classic bit of disaster capitalism, making money advising business how to get through the recession.  Nice work if you can get it.