Was out and about in the West End yesterday, so decided to pop down to Piccadilly Circus and see if any new 38s were about.  Quite a lot were, in fact, this greeted me as I turned the corner out of Regent Street (apologies for the poor quality, dark/crap camera/trying not to photograph a van bombing north up Piccadilly): 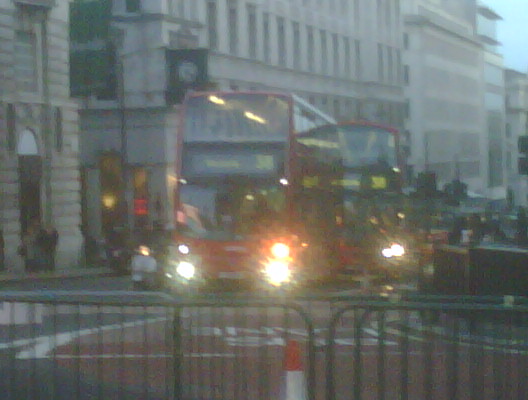 What was immediately noticeable is the bunching, the lack of patronage on the two vehicles, barely a bendy-load between them, and the fact that they were blocking the junction.  The 38, of course, is currently on diversion due to the works in the foreground, which are ironically to speed up the bendy 38*.  Joined up thinking there.

Predictions?  Slower, more chaotic, less good for passengers, less good for fare evaders (unlike the 507 and 521 the 38 has a real evasion problem), more expensive for TfL, bugger all difference as regards use of the road – shorter vehicles balanced out by longer waits at stops and bunching.

* Or, as the press release in a few months time will say, to ‘smooth traffic flow’.