Keeping Up The Standard

My brother in law, a Home Counties commuter into London* sends me this, the latest snippet in the ‘what the hell is Tom doing writing to the Standard’ pile: 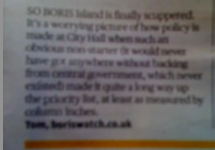 Of course I’m not actually writing the the Evening Standard, they’re pulling letters out of comments posted on their stories online which aren’t actually from certifiably insane dribbling lunatics.

Nevertheless, this has provoked a rather unpleasantly toned email from an architect, accusing us, as far as I can see, of being a bunch of anti-development NIMBY Luddites.  Considering I’m in favour of a) dense, textured cities b) tall buildings c) new railway lines d) light rail e) investment in well designed social housing and f) redesigning city roads into streets for pedestrians and cyclists you’d have hoped Mr. Diamond might have taken the time to work out what he was actually attacking, but no matter.