Basically, the data show that the fall in the murder rate since about 2004 has stopped, and if anything bounced back up a bit.  Nothing too serious, no epidemic of crime and nothing particularly to get worried about – London’s still one of the world’s safest large cities.  However, worth noting all the same.

A graph or two – first the raw data overlaid with the 5 month moving average to iron out the spikiness a bit: 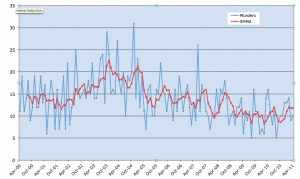 Then the 12 month data, showing that the all time low of 113 homicides in the previous 12 months was reached three times last year: 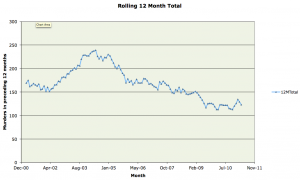 Finally the first graph, zoomed in on the Boris Era: 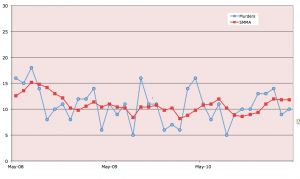 Finally, a top-five and bottom-five boroughs homicide running total since Boris took over: