Kulveer Ranger’s baby, the cycle hire scheme, may be in severe difficulty with contractor performance at present, but his hope remains undimmed.  He recently hopefully retweeted another user’s suggestion thus:

@cyclingmobility: Is @borisbikes to thank for more Londoners cycling to work than other UK towns? Office for National Statistics findings http://bbc.in/llr0FW

About two seconds perusal of the official statistics behind the report finds the answer:

The data used for this release refer to the period covering October – December 2009. These are the most recent data as information on travel to work is collected every three years on the Labour Force Survey

So, ‘no’, is the answer.  I suspect more Londoners cycle to work* because of, variously, traffic jams, the congestion charge, tube/bus crowding, affordability, health and a decade of investment in better cycling facilities, rather than a scheme which launched six months after the data were collected.

In mitigation, this important point about the period of collection was in the blurb at the bottom of an official document, and we can’t expect a man on north of £100k a year to read things, he’s got more important things to do.  One has to hope that the people drawing up the Serco contract were a bit more clued up about the need to understand the detail than Mr. Ranger.

Meanwhile the situation on the bikes continues to make the tubes look reliable, which is something of an achievement.  Serco has been fined £5m, apparently, which is official confirmation, if it were needed, that the scheme is not running well.  Boris should be very careful what he says in public now, particularly if ‘insiders’ are telling the BBC what we’ve been saying for months: it’s not poor contractural performance but the whole basis of the scheme that’s wrong:

Insiders have also told me that the current model doesn’t work, especially around mainline train stations where docking stations empty straight away

Well, duhh.  This was, of course, in the original 2008 feasibility study as a big no-no, but someone went ahead anyway.  That someone being Boris Johnson.

* A quick graph – this is the official TfL data for cycling on TfL (TLRN) roads, which obviously isn’t all of them but does include most of the main roads.  They publish quarterly statistics indexed against 2000 as a base year.  There’s one result missing owing to an early report not containing the relevant data.

What this shows is a steady but persistent increase, with a strong seasonal variance – Q4 (Jan-Mar) contains the winter months and is quite a lot lower.  Post-December last winter was extremely mild, however, hence the drop being lower than normal.  There is evidence that 2010/11’s rise was higher than normal, but not by a great deal considering the impact of fuel prices, Boris’s fare hikes and the amount of Mayoral PR around cycling.

If we attempt to strip out the seasonals and compare quarters like for like, we find that the biggest single increase was from Q2 2004/5 to Q2 2005/6.  ‘Cycling revolution’ my arse, Kulveer.

While we’re on statistics, TfL threw another context-free stat to the journalists recently – ‘5 millionth hire in ten months’.  Well, let’s see, shall we.  That’s 500k per month or 1.5m per quarter.  The last quarterly TfL ridership league table is therefore:

which puts the scheme firmly into its proper place in the transport hierarchy (they don’t yet include London Overground ridership, but the East London Line alone is 20m per year which would put it fifth with 5m per quarter).  You want a pie chart of that?  OK. 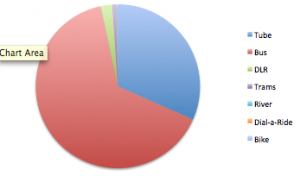