Driverless Tube Trains – A Hoax On The Public

Driverless tube trains, previously touched on here and recently by Tim Fenton, Tom Edwards and a frequent hobby-horse of our old friend Andrew Gilligoon here, are Boris’s Stalinist answer to industrial relations – ‘No man, no problem’.  Unfortunately it’s also ‘No clue’, as the response to a recent FoI of mine reveals.  It occurred to me that with only about 30% or so of the tube arguably automatable in the medium-to-long term and capacity upgrades under way on the rest it was likely that TfL would be hiring more tube drivers during Boris’s tenure rather than sacking them, and his policy of poking Bob Crow with a stick and then demanding that someone else does something to stop the potato-headed Commie was even dafter than we’d thought.  I just asked for a simple table of train operator numbers historically and projected into the future and TfL have responded with commendable speed.  Here’s the table, and a graph: 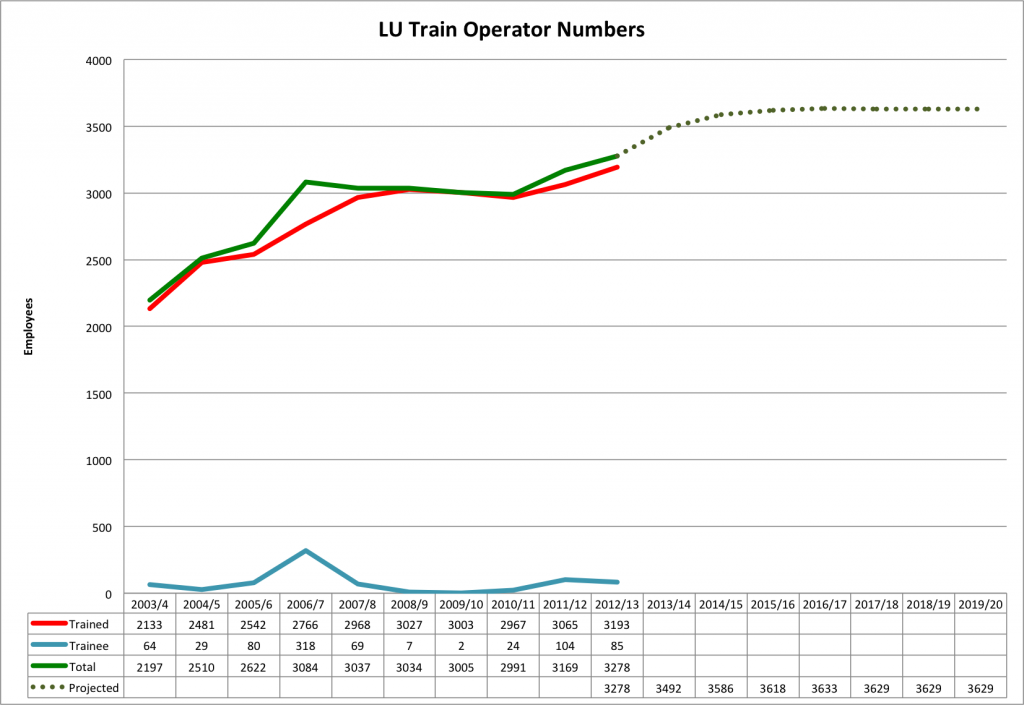 What does this all tell us? Well, Boris inherited about 3000 train operators, itself a big (40%) increase on the numbers when TfL took over in 2003. Having stayed at 3000 or so from 2006/7 to 2010/11 with very little training of new operators a substantial recruitment exercise has been under way which is intended to boost numbers by a further 400. Having reached this level (20% or so higher than when Boris was first elected) we reach a steady state TfL estimate at around 3600. They are at pains to point out that this *is* just an estimate at this stage, but it’s enough to confirm that, as suspected, the boost in train capacity carries through into a rise in train operators employed to drive them. Interestingly, however, it seems to be rather less than the capacity upgrades so it’s possible to argue that London’s actually getting more capacity per train operator.

What is definitely true is that even four years after Boris cycles off into the sunset there will be zero train operators being kicked off the job by whizzy computer trains. Bob Crow will be with us for a while, therefore.