Boris Johnson: “There Was A Technical Problem Which Has Been Rectified” – Londoners Say Otherwise. A Cooler Day – Has Route 24 Also Cooled Down?

Sir Peter Hendy, Commissioner of Transport for London: “It’s not a political issue……”

You could’ve fooled me, Sir Peter. As it’s Wednesday, I have a Limerick for you:

There was a bold knight called Hendy, who liked his buses un-bendy
When told “They are hot” he said “They are not – and to claim that they are will offend me”

The Evening Standard’s Ross Lydall reports that Sir Peter and designer Thomas Heatherwick were out on a New Bus For London with a thermometer last night – rather late to the party.

We found that the new bus, when the cooling is working properly, is cooler than the equivalent latest ordinary bus.

Wright’s [the Northern Ireland bus manufacturer] have fixed all the buses on the 24 and are now checking the ones on the 38 and fixing those too.

It’s not a political issue, nor is it a fundamental design failure, and it’s nothing to do with a lack of opening windows; it’s a manufacturing and operating failure which has been fixed by Wrights.

What, exactly, is “the equivalent latest ordinary bus”?

Is it, perhaps, the hybrid version of the Eclipse Gemini (ironically a WrightBus body on a Volvo chassis) – an example of which I travelled on with my thermometer on Monday this week?

Whatever temperatures Hendy and Heatherwick recorded on the New Bus For London last night, Ross Lydall reports that they were:

How is that at all representative of the temperatures experienced by passengers when the bus is in operation?

As the “conductor” said to a passenger on route 24 who expressed the hope that the New Bus For London “cools down for you”:

It won’t do, more people get on, more body heat!

Sir Peter also claimed to the Evening Standard that the decision to make a bus with no opening windows (apart from in the driver’s cab) was taken by TfL, not Heatherwick (as previously stated):

If you cool the bus with air flow, opening the windows lets the air flow dissipate.

And what does LEAVING THE BACK DOOR CONSTANTLY OPEN do to it, Sir Peter? As I’ve been banging on for years, what is the point of manufacturing a vehicle with expensive air cooling and heating when you’re going to leave the back door wide open?

Trying to claim that the cooling system doesn’t work properly if you have opening windows is a complete red herring when there is a large hole present in the back of the bus.

Time, I think, to refer back to a letter published by the Times in December 2007 (before Boris Johnson was elected as Mayor of London) from then-Tfl Managing Director, Surface Transport, David Brown:

Your welcome for a new Routemaster bus (“Blueprint for ‘son of Routemaster’,” Dec 19) does not report the true cost to Londoners. Reintroducing open platform buses would require conductors on all routes, as they would be required to safely manage access. This would cost £600 million – raising this money would require a huge fare rise for London’s six million daily bus passengers. The single fare would have to rise from 90p to at least £1.50 and the weekly pass from £13 to at least £21.

Open platform buses mean more passenger deaths. The passenger fatality rate on Routemasters is more than double that of other London buses.

Contrast with TfL’s current plan to sack all the conductors on London Overground:

TfL said 130 conductors on the Clapham Junction to Stratford line were no longer needed because advances in drivers’ radio technology made their roles redundant.

It said conductors were now limited to opening and closing doors and their wages could not be justified for such a restricted role.

Bus operator Go-Ahead London, meanwhile, are currently recruiting for “conductors” for route 11, the next to be fully converted to New Bus For London. Their job advertisement on their website:

The new Bus for London will go into operation on the 21 September.  Go-Ahead London will operate this fleet of buses on the Route 11 between Liverpool Street and Fulham Broadway.  This service will be operated as a crew bus with the driver and the new position of Passenger Assistant.

The primary role of the Passenger Assistant is to travel the length of the route and ensure that passengers board and alight the bus safely.  You will also be required to signal to the driver when it’s safe to depart a bus stop.  As part of the role it’s your responsibility to be visible to passengers by patrolling both the lower and upper deck and be proactive in assisting with general enquiries, monitoring the wheelchair space and asking people to clear the area if a wheelchair user wishes to board.  You will also be responsible for encouraging passengers to touch in with their oyster/contactless payment cards and ensuring that any litter is removed at the end of each trip.

For full details of this role please download the Job Description from the link below.  If you still have unanswered questions, please call us on 0800 38 99 7 99 (between 09.00 and 17.00 Monday to Friday) for further information.

If you are interested, please submit your CV and a covering letter explaining why you think you are a suitable candidate for this role via the update button below.  Alternatively please return to:

Your CV must be up-to-date with full details of your employment for the past 5 years along with reasons for leaving current/previous employers. You must also explain any gaps in your work history (for instance if you were unemployed, studying etc.).

Please state clearly in your covering letter any dates that you are unavailable during July and August 2013 and your current address, contact telephone number and email address.

We expect to start the training programme on the 2 September to ensure that we have the required number of staff in place by the 21 September when the New Bus for London will be introduced.

The role will predominantly be full time positions; however there may be opportunities for part time working.  If part time working is what you require please specify your availability to work within your covering letter.

APPLICATIONS MUST BE RECIEVED BY JULY 19

which differs somewhat from the advertisement they placed in Metro newspaper on 4 July: 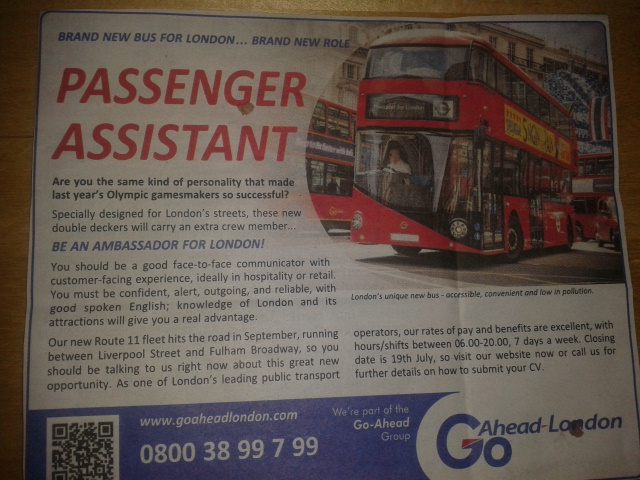 Be an ambassador for London!

You should be a good face-to-face communicator with customer-facing experience, ideally in hospitality or retail.

The primary role of the Passenger Assistant is to travel the length of the route and ensure that passengers board and alight the bus safely.

In other words, a glorified Health and Safety Operative who likes putting on a performance.

Talking of Health and Safety, a reminder of the speech Boris Johnson gave when he visited the WrightBus factory in March this year [BBC iPlayer, 48:04 onwards, limited availability online]:

Why is this bus such a triumph? It’s brilliant for passengers, isn’t it?

Because you now have the sovereign right as free, sentient, adult individuals to hop on and off the platform, again, which was taken away by the Health and Safety fanatics in Brussels and has been rightly restored to the people of London.

The only “Health and Safety fanatic” I can see is the Mayor of London, whose New Bus For London employs a member of staff whose primary purpose is to supervise “free, sentient, adult individuals”.

Again, a barefaced lie from Boris Johnson – who are these “Health and Safety fanatics in Brussels” ?

The Routemaster was withdrawn from general service in London as the vehicles are not accessible, they are now almost 60 years old, the last one was manufactured in 1968, nobody makes parts for them which means decommissioned Routemasters were butchered for spares.

Brussels was not involved.

If, as the Mayor claims, open platforms were “taken away” perhaps he’d care to inform us which Brussels ruling has miraculously “restored” them?