One silver lining if the much vaunted Docklands white elephant is knocked over by a ship or a high wind or Godzilla is that there won’t be that many people inconvenienced, judging by the flatulent sound of air escaping from the PR puffball over the past few weeks.  It’s not long since TfL were boldly announcing that the thing had met its targets, without mentioning that they were extremely lowballed – the most recent Commissioners report [PDF] finally fesses up:

Passenger demand in period 6 was second highest this year, as seasonal demand peaked over the summer holidays. EAL passenger journeys were below budget. An improved operational readiness plan is being prepared to allow access to the EAL for mobility scooter users later this year, this project includes subtle cabin modifications and specialised staff training

That’s it.  The 25/9 1st quarter operational performance report [PDF] suggests the target for Q1 2013/14 was 0.4m riders, an average of only 31k a week – the real figure for the first 13 weeks was 450k, which suggests that TfL internally don’t expect it do do much over 35k in an average week even in late spring/early summer.  It also makes the only comment I’ve seen on how the fare income is stacking up:

Oh dear – what’s worse is that the newt fancier’s train set, London Overground, is bailing Boris out on this with much stronger income than expected:

This strong Overground performance has led to an increase of £12m in the full-year forecast, partially offset by a £4m reduction in Tramlink and Emirates Air Line Income.

Just think what £65m could have bought in the way of Overground extensions, new trains and so on, taking people places they actually want to go.

Now, luckily, thanks to Caroline Pidgeon AM, we have weekly ridership statistics to chew on.  This year’s ridership parcelled up into Periods:

So what the Commissioner meant was ‘Period 6 was the start of a fairly rapid fall-off in ridership from what was a considerably lower Period 5 summer peak ridership than last year’s 534,218, but at least we have the Olympics to blame for that one’.  We’re now well beyond the Olympic effect from last year and in a position to make year-on-year comparisons, particularly given that last week (Period 8 Week 3) was half term in both years.  Here’s the year comparator: 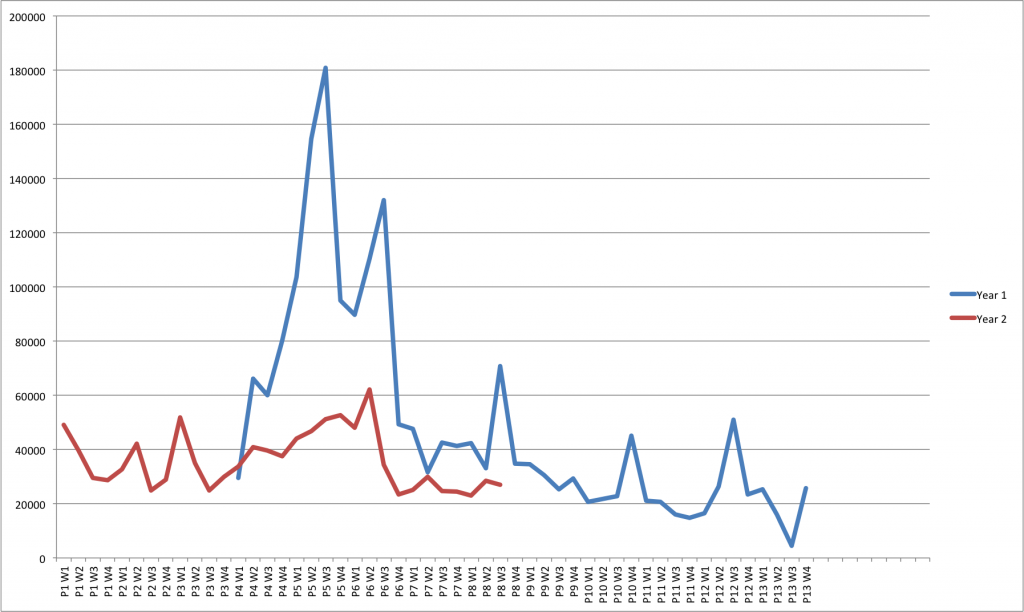 From which we can see that since the end of the summer ridership is essentially flat, running mostly about 40% below last year but half term week was a whopping 62% down (from 70k to 27k), as the wind and rain presumably put people off.  Monday’s storm naturally led to the ride being closed, too, which won’t have helped.  All this limping along comes despite the cable car’s being the subject of great heaves from TfL to try and attract riders involving publicity campaigns, ticket giveaways and so on, curiously not involving the only thing which might help; abandoning the dreadful idea of non-Oyster ticketing at a much higher rate than the parallel tube/DLR. We’re even seeing all Boris’s pet modes (river/cycle hire/dangleway) vigorously cross-promoting each other on Twitter, like three little boys standing on each others shoulders to pretend to be all grown up.  Rather sad.

The next few weeks are crucial, though, as post half term November into December was when a real decline set in that halved the weekly numebrs and didn’t reverse until spring. If we continue being 40% below last year we’re hardly going to have anyone riding come mid-December; it’s not like hanging about over Docklands mudflats is a great Christmas tradition.  It’s not exactly Hamleys up there.  The nadir was the week ending 15/12 when we had 20,060 last year.  We might struggle to reach much over 10k this year at this rate.

One other sign that TfL are beginning to give up on the idea – the recent milestone of 3 million rides went completely unmarked, although they have added it to a slightly revamped web page. Woo.  Normally they wheel Boris out for a peppy line or two in a press release if more than four people share a cabin, so that, like Boris shying away from the in-service Lard Bus, is telling.  Don’t Embarrass The Boss is still Rule One at City Hall.  Perhaps this is why:

Next up in ‘Bashing TfL With Their Own Data’ – cycle hire.