Plummeting Cable Car Riders – The Nightmare Continues So, Did Boris Flog Any Buses To The Chinese?

Is Barclays Cycle Hire In Trouble?

It does have to be asked now.  Here, from Datastore data, is the pattern for the four years of BCH so far: 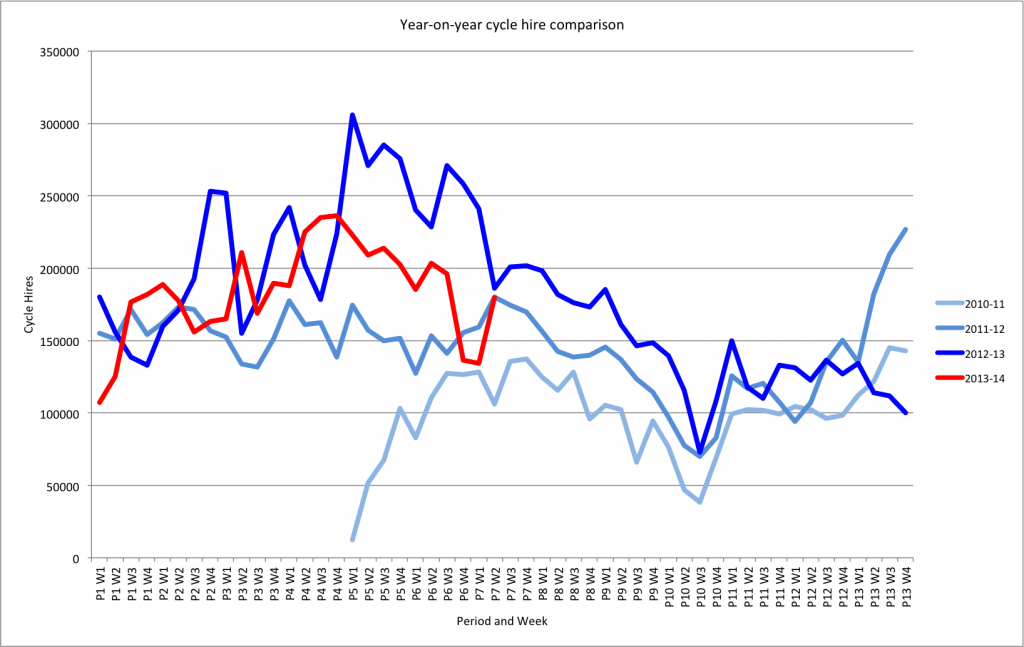 Red is the current year; we’re awaiting October’s data at present so it only goes up to 30th September.  Allocation into period/weeks as per my cable car data is done by me, painstakingly, to try and fathom some patterns out of the daily data.

We can see the first two years followed much the same pattern with a peak around Period 6-7, which is late summer (surprisingly it seems to be more end August/beginning September, suggesting some correlation with the usual August dip in other modes).  Then a rapid tail off to a low point around the end of Period 10, which unsurprisingly is Christmas/New Year.  After that it bumps along fairly flat until the weather improves – the sharp rise in March 2011-12 was partly due to a period of extremely good weather around then, particularly the last week of the month.

Maximum temperatures exceeded 20 °C in places between 24th and 29th (22.8 °C at St James’s Park and Heathrow, both Greater London, on 28th), with some local March records being broken

For comparison March 2013 shows a marked decline in hires, and the weather record shows why:

A band of rain and snow affected the south-east early on 27th, later giving way to widespread showers, some falling as snow.

March 2011, in the middle of the two, was, not surprisingly, about average for temperatures.

The other major change in the period of the graph was the eastern extension in early March 2012, which came just before the good weather and is the other explanation for the big spike at the end of the year.

Given that it’s only really safe to compare this year (red) with last year (deep blue) – ignoring the Olympic spike in the middle it does look as if the two years aren’t showing much of a rise in usage.  Remember that P10 2012-13 saw the doubling of prices and it does look as if that might be depressing numbers a bit – this year saw a heatwave for several weeks over the summer but numbers didn’t reach the 250k+ seen in May-June 2012, well before the Olympics, peaking at about 235k a week in mid to late July 2013.

We also have another statistic to consider; the cost.  TfL have finally accepted that the scheme will always require subsidy and will never cover its costs:

So user charges cover barely 33% of the cost of running the scheme, Barclays barely cover 30% of the remaining 16m leaving the rest of us on the hook for more than twice what the bankers whom Boris is always praising chip in.  He should be thanking us, about twice as often.  Still, we can now estimate the subsidy per ride; 2012-13, Olympics included, saw 9.3m hires, so for each bum on a saddle we have the following:

For comparison, the bus subsidy, which is reducing as Osborne slashes the revenue grant that pays for that £1.20 per bum per saddle, is about 17p according to Sir Peter Hendy’s evidence to Parliament recently, down from 25p when Boris was first elected.  By any standards cycle hire is extremely poor value for money in comparison, yet is getting expanded while the bus network, which is how London gets to work and which is increasingly overcrowded (particularly in south east London where there are zero plans to expand anything), stagnates, with money that could go into expansion going into the vanity lardbus.  What’s the big plan, Boris?  The London Assembly have already produced their report.

P.S. noted Hammersmith and Fulham libertorian Harry Phibbs told me 2011 that the cycle hire scheme was going to make a profit ‘in a couple of years’. 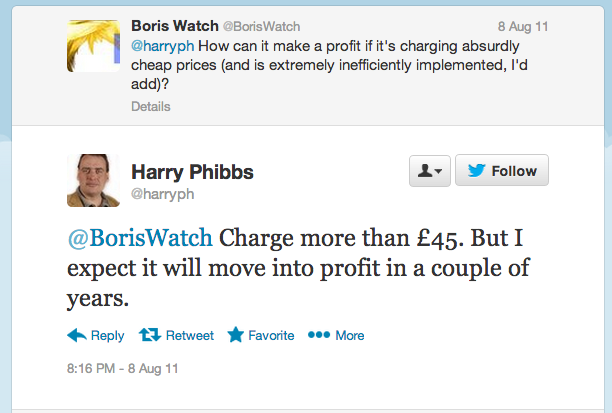 He hasn’t got back to me about how that’s going yet.