Reading some TfL Board Papers, now I’ve found them again, this section from TfL’s response to the RTF (Michelle Dix, again) stands out:

Since last year’s launch of the RTF report, TfL has conducted additional analysis which has highlighted the further pressures that new, higher growth forecasts and aspirations for a better city will place on London’s roads. This analysis has confirmed that, even with all of the Mayor’s Transport Strategy investment, significant increases in road congestion can be expected.

In other words TfL thinks that Boris’s mad dash for growth at all costs is going to outstrip both the MTS plans (which are mostly public transport, mainly Crossrail and tube capacity) and ‘smoothing traffic flow’ and other nonsense, on which note smoothing traffic flow has officially failed – TfL are increasingly worried about journey time reliability going backwards as the economy improves.

The Committee discussed the variance to target on the Transport for London Road Network (TLRN) reliability – AM peak measure. The variance was the result of a significant growth in traffic across London over the previous six months as a result of increased economic activity. Traffic volume was back to 2009-10 levels, although the comparable reliability figure was better than it was in 2009-10. The Committee discussed the work TfL was doing with the police to reduce the disruption to the TLRN when road traffic incidents were being investigated. Significant improvements had been made but further lessons could be learned from abroad. TfL was also looking at how it could improve the availability of real time information to road users when traffic incidents occurred.

The Q3 figure was down at 87.6%, the lowest on record, which is also affecting buses.  It’ll be interesting to try and work out where the increasing congestion is most severe.
So what does Michelle Dix recommend here?  Well, two sensible options and two dreadful, backwards and idiotic ones, inevitably, suggesting an internal tug of war between MOAR ROADS and basic common sense, who additionally have lack of allocated capital investment on their side.
Sensible things:

Both of which are MOAR ROADS.  Let’s take the first one.  TfL’s statement here is:

A study of the Inner Ring Road, to assess its strategic ‘moving’ function and role in enabling new development

Assessment of further measures to tackle congestion including increases in junction and link capacity, and enhancements to orbital capacity

The current IRR is roughly the edge of the congestion charge zone, so Euston Road down into the eastern part of the City, then across Tower Bridge, down to Elephant and Castle then via Vauxhall and up into Victoria, thence to Hyde Park Corner, Marble Arch and up the Edgware Road.  Notably there are a lot of areas of high density building going on here, particularly at the Elephant, Vauxhall and to the east and north of the City, not forgetting the Railway Lands around Kings Cross. The land the IRR is sitting on, therefore, could be quite valuable in the right hands.

Additionally, having a major road on it makes land next to it, perversely, less attractive.  This is the Hogarth Business Park effect, where having good road connectivity doesn’t mean your office block is more attractive, while the negative environmental impact of the traffic makes it less attractive.  Modern London wants high density buildings and low density roads, which is why Crossrail’s stations come with large amounts of property attached.  Handily there’s a map showing where on the IRR TfL are particularly interested: 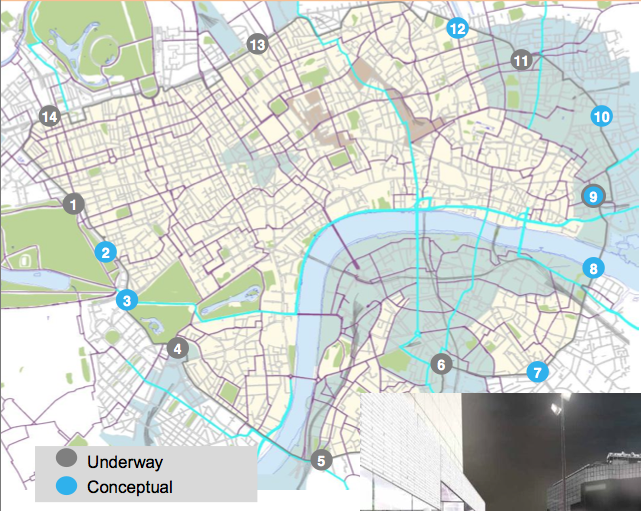 Lord knows what ‘Underway’ and ‘Conceptual’ means, though – Better Junctions schemes?  The map is big on cycleways, albeit accidentally showing how eastern/southeastern biased the Cycle Superhighways are.

So, moving the IRR is in the interests of the property industry, but where do we move it to?  A previous Dix effort offers some pointers: 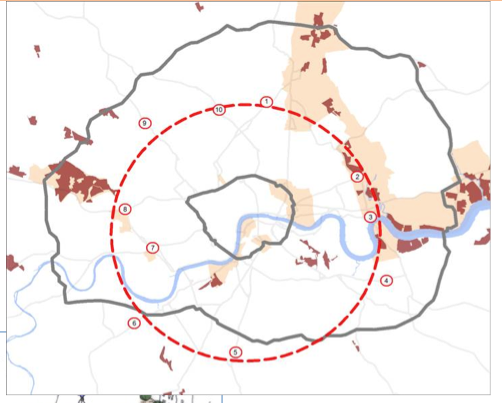 Yes, the area they’re looking at for their Inner Ring Road Relief Road is roughly halfway between the IRR and North Circular in the north and roughly along the line of the South Circular in the south.  In essence it’s a sort of Ringway 1.5, stopping orbital traffic from heading into town to the IRR, then round it, then out again.

Looking at the numbered points on the map we get a fairly clear picture of what’s being conceived here.

Starting in the west, the obvious one is the Westway northern roundabout – in fact if you really wanted to divert traffic along Euston Road you’d knock down half the Westway and link the A40 straight into your new tunnel.  That instantly relieves Euston Road of the firehose of the A40 pumping traffic into it.  I’ve no idea if that traffic wants to go on an underground tour of north London but hey.

Moving round, my personal favourite, the A41.  Relatively fast dual carriageway through Barnet, crosses the NCR at Brent Cross on a flyover, then comes to a shuddering halt on the single carriageway Finchley Road.  OK, divert that into your tunnel, then, and stops traffic hitting the Inner Ring Road from the north (the bit round the NW corner of Regent’s Park is notoriously bad, by the way).

Keep going round, next we hit the A1.  Now, assuming we want to prettify Archway and don’t want to widen the A1 north of there (we tried that in the 70s, and it didn’t end well) we look for the nearest point to the middle where the road is still passably wide. Ah yes, Archway Road/Aylmer Road junction – you might want to do something about Aylmer Road, actually, but that’s heading too close to the NCR, and we’re trying to steer a middle course here.  TfL have already done Henlys Corner and Falloden Road, of course.

Next, please.  Ah, the Seven Sisters Road.  Lovely congestion.  Let’s give it some executive relief, somewhere around the Green Lanes junction at Manor House – we were stopped from bypassing Green Lanes in the 70s, after all.  Lord knows what it would look like, but presumably reducing traffic cutting down to Kings Cross and Camden would be the aim.

Where next?  I spy some unfinished north facing slip roads on the Blackwall Tunnel northern approach.  Let’s finish off there, also offering people an eastern slip road for the chance to speed along that nice A12 under Wanstead, they’ve even left a gap for us.

Finally we whizz down the lovely not at all congested A12 to the Blackwall Tunnel.  Might even put a roof over it (it’s one of the very few routes you could put the RTF’s pet idea of a ‘green roof’ over, and actually that’s not the worst idea in the RTF, it’s just not very widely applicable as most inner London arterials are on the surface or have properties with direct frontages.

That’s the northern bit so far as I can tell, and that more or less matches the map in Michelle Dix’s presentation, which has numbered points 8 through 10 and 1 to 3 mapping to the route outlined.

Turning to the south,  we start on the south side of Blackwall and veer a bit west of south and come up under Shooters Hill, where presumably we join to the A2 in some way (point 4) – a nice tunnel from the Kidbrooke interchange, anyone?  There now isn’t a numbered point until we get all the way round to Streatham, and Lord knows what we do there – relieve the A214, perhaps?  There’d have to be something facing south but the only realistically large road is the northern stub of the M23 which they abandoned plans to extend in 1980 or so after Ringway 2 died.  If we’ve got the diggers out, why not a nice tunnel from Purley Way up to Streatham?  Don’t want Croydon to feel left out, and they’re keen on making the A23 a nice big pipe into their lovely new Westfield for well-heeled South Downs residents (see ‘A23 Fiveways’ plans).

Finally we head for Wandsworth and the weird six lane Trinity Road, the capital’s most pointless road improvement.  We can probably hook into that at the south end fairly easily (near Wandsworth prison, so the neighbours won’t complain), and at the north of there pop across Wandsworth Bridge Road and we’re in Flyunder Country where LBHF will just love us to tunnel up to Shepherds Bush to complete the Ring.  We do need to hook into the A4 at Earl’s Court, but presumably there’ll be a nice Flyunder there, won’t there, to speed people out to Heathrow.  It all joins up!

Put it all together and you get something roughly like this: 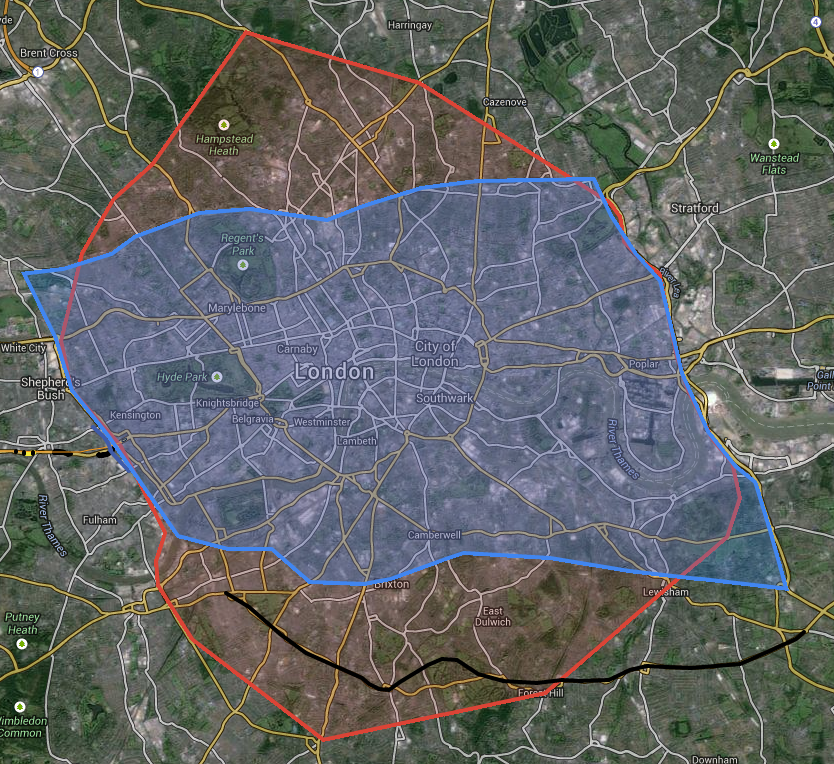 Things to note here – you always come back to the West Cross and East Cross Routes whatever you try.  We’re basically trying to connect up all the points where radials into London stop being dual carriageways, which is why there’s a pointy bit at the top; the Archway Road protest was one of the key moments in London’s anti-roadbuilding history.  In the south there’s no obvious route as there are no obvious major roads between the A2 and A3 (the black line is the 1980s South Circular plan with some on-line and some tunnelled bypass sections, for comparison, and it wouldn’t be wholly unexpected to see something made of that).  Note that running it via Clapham Common is probably out of the question due to gentrification so the Trinity Road option is considerably less trouble – in fact the further out you go the less trouble you have with land values and well-heeled locals – that’s why Ringway 1 in blue is dead and buried.  A lot of this boils down to a policy of moving the traffic into Zone 2 and 3.

Having said which, all those points where this orbital interfaces with any local roads will be fairly hefty surface engineering, involving blight, land take, demolition and with the potential for generating a lot of opposition.  For that reason it’s essential to keep an eye on what TfL are up to here – they’re supposed to produce something by autumn 2014.