How Did Boris Get To Kurdistan?

Boris suddenly appeared in Erbil, Kurdistan last week, accompanied by the Sun, who were curiously exempt from what appeared to be a considerable effort to keep things secret.  Of course, once he was there the publicity flowed, giving the impression that instead of a two-bit failed leader of a city who’s not really doing his job any more here was a Great Statesman like, well, Winston Churchill.  I’m not sure how many were fooled by this: 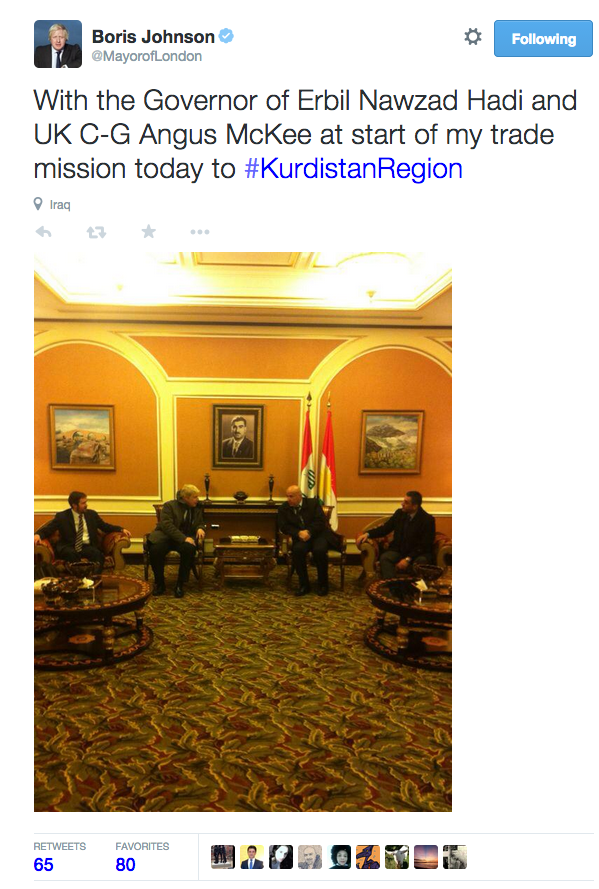 At the end of the visit on the 24th came one fulsome tweet from the KRG’s foreign minister which included a picture of, presumably, the aircraft Boris was boarding to get home again: 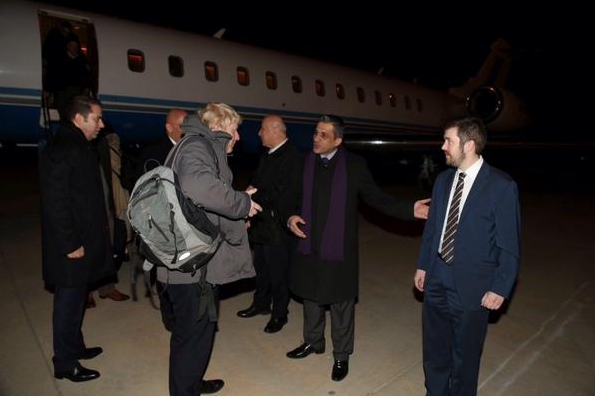 Let’s do an Eliot Higgins job on this, shall we?

The identification was fairly easy after that – that’s a very long aircraft, so searching Google Images for business jet pictures quickly finds that the one that fits best is the Bombardier Global Express.

Next, it must presumably fly out of UK airports quite often, so let’s search again for Global Express pictures at Farnborough and try and match the livery. Bingo, there’s a good match with this one pictured at Farnborough just under a month ago:

This is the only Global Express XRS aircraft in the fleet of a private jet rental outfit called GainJet who offer:

The luxurious interior has been specifically tailored to ensure the highest level of passengers’ comfort, safety, and convenience. The spacious cabin accommodates 14 passengers, while the onboard entertainment system and business tools ensure that all our passengers have everything they need to enjoy their flight.

Erbil Airport, while not far from Mosul where things are mostly terrible, is not particularly a warzone – Top Gear’s Middle East Special of 2011 started there, for instance.  This means there are scheduled flights there which will be a damn sight cheaper than hiring a large top of the range business jet.  There aren’t any from the UK, however, but another European country is already making links in the area – Iraqi Airways fly to Dusseldorf and Berlin, Lufthansa fly to Frankfurt and Germania serve Dusseldorf and Munich.  Alternatively, Austrian fly from Vienna every day except Saturday and there are lots of ways to get from Erbil to Istanbul.  In short: yes, there are cheaper ways to get there, you just have to change planes in the Axis countries.  Churchill wouldn’t approve.  Mind you, his view of the Kurds aligned rather embarrassingly with that of the late President Saddam Hussein, so best not to go there, really.

So, was SX-GJN at Farnborough over the last week?  The January 2015 Farnborough Movements page shows four sightings:

What this doesn’t show is direction, of course.  The first tweet I can find coupling Boris and Arbil/Erbil is this from 11:20am GMT on 21/1 and he was reported to be about early on the 22/1 as well.  In fact, that 21/1 tweet from a local account might well have jumped the gun, as the UK press didn’t know until midday on the 22nd (the Standard in particular were slow off the mark, suggesting that this time it wasn’t paid for by the Lebedevs and even the Sun’s Tom Neutron Dumm didn’t spill the beans until 1:17pm even though the paper rather conveniently had someone embedded with him).  It wouldn’t be surprising if there was an embargo in force, of course.

The jet photograph was tweeted at 9:47pm on the 24th, but that doesn’t mean it was taken then as none of the others in the same tweet can have been.  It’s not impossible, therefore, that the photo is of a late evening arrival rather than departure.

FR24 does not explicitly show SX-GJN, but it does show Global Express aircraft as type GLEX.  Replaying for 20/1 around 4pm shows two aircraft landing, including one arriving around 16:38 from Zurich.  Replaying for Wednesday 21/1 around 9pm shows a departure around 9:24pm routing rather strangely straight across central London and then at high altitude over Germany, Prague, Budapest and the Balkans, fading out over the Turkish coast on a direct course for Arbil well past 1am on the 22nd: 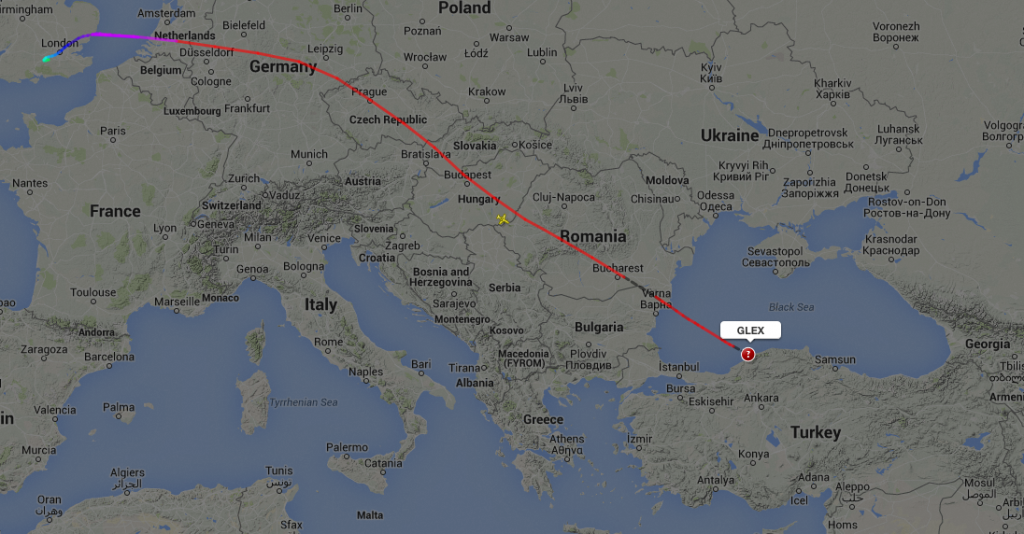 Replaying for Friday 23/1 at 21:00 shows a near-identical flight back from high altitude Turkish airspace and again across London to Farnborough, landing around 21:15: 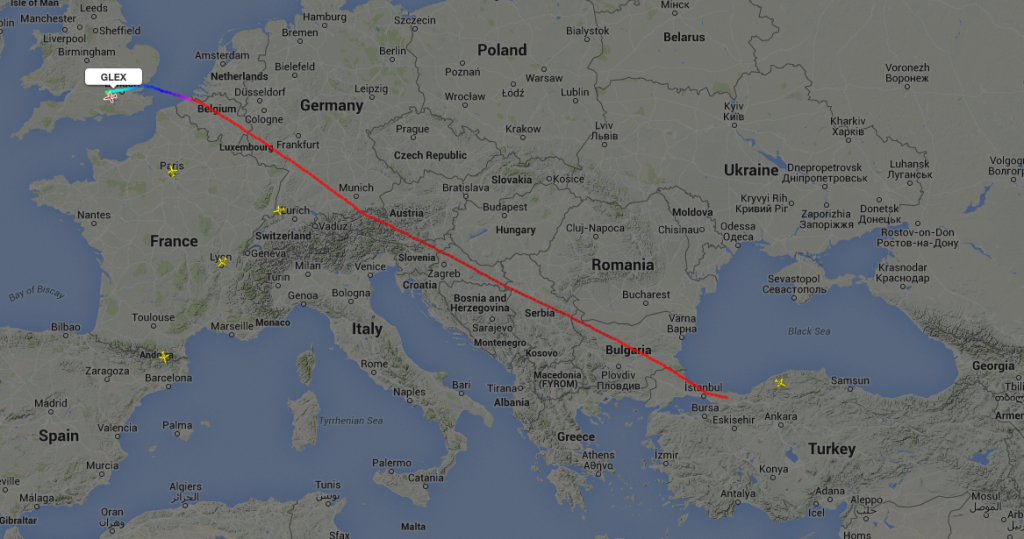 The disappearance over Turkey may be for security reasons – note the other GLEX nearby in both images was picked up fine there.

So, summing up the evidence:

PUNCHLINE: SX-GJN is registered in Greece, as GainJet are a Greek operation.  The President, however, is Captain Ramsey Shaban, formerly vice-president and Chief Pilot of…Iraqi Airways (and I’d assume it’s actually more like ‘Ramzi’ when he’s not talking to Westerners).  GainJet itself is Kuwaiti owned, however. Boris just loves the heady combination of oil, aviation and Arabs, it seems.